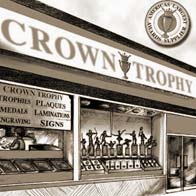 In the summer of 1978, Chuck Weisenfeld opened the first Crown Trophy store on Avenue U in Brooklyn, NY. With a vision of the industries future and strong personal determination to succeed, Crown Trophy has grown into the largest retailer of award and recognition products in the country. For over 41 years the Crown Trophy name represents the highest level of customer service, quality products and a commitment to excellence.

Crown Trophy is a community minded business with a focus on working with sports leagues, youth groups, clubs, schools and organizations. The Crown concept is to reward everyone who participates and Crown's axiom became "Crown Trophy . . . Where Everyone Wins". Hard work, love for sports and the desire to give back to the community, helped make Chuck’s dream an instant success. Staying focused on the community, Chuck initiated an expansion program to reach out to other neighborhoods.

Chuck had developed a business that he was proud of. Soon friends and business associates contacted Chuck to open a Crown Trophy store in their community. Crown Trophy successfully expanded into other towns and began to offer franchised territories throughout the northeast. The store concept started to grow and what started as a few trophy shops soon blossomed into a fully developed Franchise System on a national level. Crown Trophy was becoming the major force in the awards and recognition industry and stores were opening throughout the country. Crown Trophy became "America's Award Store".

As the franchise system expanded throughout the United States, Weisenfeld turned his attention to product development. His strong understanding of manufacturing evolved into a progression of exclusive products only available through Crown Trophy franchised locations. Staying in contact with community organizations and listening to their needs further instilled Chuck’s belief that new product development needed to be an ongoing process to remain as the innovative leader in the industry.

Crown had cornered the youth sports business and the franchise developed over 100 stores and was growing fast. Weisenfeld knew to expand the business further he would have to focus on the high end corporate awards market, providing businesses with the same product quality and customer service synonymous to Crown Trophy. Exclusive corporate product, custom recognition items and “One Stop Shop” convenience for businesses put Crown Trophy on the fast track to securing a large foothold in the corporate market.

Today Crown Trophy has 150 locations in over 40 states. Their expansion plans continue as they have a corporate office and warehouse with over 100,000 square feet. Located in Hawthorne, NY., Crown Trophy Headquarters operates a state-of-the-art warehouse and houses the entire franchise business including the franchise support team and the graphic artists department. Being the leader and most influential company in the expanding awards and recognition industry, Crown will continue to grow, develop high quality innovative products and provide it's customers with complete satisfaction.

Thank you, from all of our Crown Trophy family!